“Cheese-burg-er” sang a chickadee early on a Saturday morning last June, placing me in the mountains before my eyes open or my brain whirs to life.
My eyelids flutter, my eyes coming into focus on a murky pre-dawn sky stenciled with tree limbs through the skylight of my car – my watch hanging next to me says 5:30.
As I tentatively push down my 0 degree sleeping bag, mild temperatures wash across my braced body – no colder than any other summer morning camping in the Sierra – a surprise given the recent weather and my day’s plans.

Friday night I hastily stuff camping and skiing gear into the back of my flying green toaster(Honda Element), heading south after work, along the rocky east shore of Lake Tahoe, down to Carson City, through the chocolaty-churning Walker River Canyon and into Lee Vining on the chalky shores of Mono Lake.

I slide into a comfortable, red vinyl booth at Nicely’s Diner for a quick burger, pressing my face against the window to stare up at the sage-stippled mountains framing Tioga Pass, opening for the first time the coming morning.

Back in the driver’s seat, I only get as far down Highway 395 as the intersection of Tioga Pass Road, and the singular Mobile Mart gas station.

Young outdoorsy types in fleeces and down, tourists in short shorts and low-swinging cameras, and camouflage-clad Cabela’s models all circulate around as the band covers an eclectic range of music.

But I’m restless, unable to sit still too long amongst uncomfortably like-minded people and I go back into the car heading south on Highway 395.

Thorny lava domes loom out of the pine forests and sage-covered valleys in the foreground, and the towering white Sierra dominates the backdrop before I turn down a dirt road, wedging into a cluster of RVs and trailers among the trees, awnings drawn and generators purring.

Laid out on the lumpy seats of the passenger side of my car, I’m asleep before the sky is dark – must have been a long week at work.

So it’s 5:30 and I’m wide awake, but the ski lifts don’t start spinning until 7:30 at Mammoth Mountain. I slide out from under my sleeping bag into the driver’s seat, staring blankly through the windshield, and chew on a granola bar.

“What the hell,” I think. “At least I’ll get front row parking.”

I start up the engine, and slowly crawl out of the jumble of slumbering campers.

Now in the ski area parking lot, I’m staring out the windshield again, watching the mountain, scanning it up and down. Cars begin to pour in, stacking like Tetris pieces on the black pavement, and I see a red Audi convertible slide into its place. I make an educated guess and start walking towards it, clunking in my plastic ski boots, and an old friend, Mike, up from San Diego, pops out.

Now at 8:30 we’re standing at over 11,000 feet and I almost forget my skis for the incredible views of the surrounding Ritter and Minaret ranges. I machine gun off a few pictures then pole frantically to catch up to – or at least not lose completely – Mike, who’s ripping in true racer style down the quickly-softening snow. The mountain is a patchwork of brown smears of dust, stippled sun cups, crumbling groomers and icy shade – but hey, it’s June 5 – this is pretty dam cool. The ever-changing texture and consistently sets a burn into my legs quickly. The snow can – and generally does – throw the breaks on at the most inopportune moments, nearly sending me over the figurative handle bars.

But the big mountain and little crowds have Mike and I racking up the vertical feet quickly – I’ll trust his engineer’s assessment in saying we dropped over a cumulative 15,000 feet in a matter of hours.

Down in the town of Mammoth Lakes later that afternoon, it’s 75 degrees – the transition from summer to skiing and back again continues to befuddle. But Mike and I have a goal in mind, and we found it in an unassuming industrial park across from the chi-chi shops and restaurants of the ski village – Mammoth Lakes Brewing Company.

A cheerful redhead walks us from light wheat beer to dark barley wine, by which point I was feeling general good will towards all around me. And the tasting room is filled with fellow mountain pilgrims – dirty, ruffled climbers, goggle-tanned skiers and locals all different, but all looking for the same thing in the Sierra. Here, we have the unique opportunity to drink the mountains in – the appropriately named 395 IPA has Eastern Sierra sage and juniper rubbing along with a healthy dose of hops. Floating, disconnected conversations bounce effortlessly from the beer to nearby hot springs and granite formations on Donner Summit to thwarted attempts on Mount Shasta. It’s a convivial atmosphere not uncommon to small mountain towns – something that has captured my devotion as much as the granite peaks and glacial lakes.

Back to the campground, I watch bemused at the interactions between a family replete with the latest camping gadgetry and the shirtless, white-bearded man in a mural-painted 1960s-era bus. Again I struggle to keep my eyes open until sunset, watching curiously now on my back as mosquitoes repeatedly bounce off my skylight – while all the other windows are wide open. They aren’t interested in me apparently, and I figure they think the flat reflective surface is water, where they want to lay eggs.

Back at the Mobile Mart Sunday morning, yawning and scratching next to my car at the pump, I see a fellow Truckee resident, a photographer named Cheryl. She tells me of her exploration into Yosemite the day before, good spots to shoot, and the harsh story of a motorcyclist, a deer and its unborn fawn splayed out across the road in bloody chaos across the road above Mono Lake. She tells the story matter-of-factly, without much sentiment, and I think about how we become accustomed to such things in the mountains. Stories of friends and neighbors lost in avalanches or accidents of limit-pushing undertakings in extreme environments all too common among people who live on the edge, for lack of a better cliche. Still, the story sits with me as I head up towards Tioga Pass, and I make an effort to slow down, and to keep my eyes on the road and off the surrounding cliffs – for five minutes at least.

I soon wrap my body around the steering wheel as the road winds upwards, trying to press my face as close to the windshield as I can – the small glimpses through car glass aren’t enough to take the surroundings in. Places I want to stop whip by as I see how far I can penetrate into the park in a day, and avalanche zones often prohibit parking in some of the greatest viewsheds.

But Olmsted Point appears around the next bend, with Half Dome, Clouds Rest and Tenaya Canyon in full view. There I sit and watch. I watch the mountains, the tourists, a marmot and a coyote. I don’t know if the marmot is barking at the coyote, or at me. The coyote is not the intruder on the landscape, but then again, I don’t think I’ve ever given the marmot reason to believe I’d eat it.

Sitting quietly, I reflect on the gathering Friday night, the small crowd in the brewery Saturday, the skiers and snowboarders flowing up and down Mammoth Mountain and the stream of cars behind me. Each is a gathering place for people worshiping in a larger temple – but I like to contemplate the experience in relative solitude. I’m not a religious person but I’m starting to see the parallels. To take the cynical, clinical view, religion was created to explain the things science hadn’t yet – but it’s still around to explain what science still can’t. Part of the human experience can be chalked up to evolution and biology – taking pleasure from food, drink and sex makes sense – reinforcing biological imperatives. But why do we, hiking, climbing, skiing and watching in the mountains, take pleasure from these places? That’s where my understanding of biology falls short, and the human experience picks up.

I’m chasing these thoughts in circles when a tour bus grinds to a halt, and it’s time to get out of there, and out of my head.

At Tioga Pass again, I press a monocular to my eye, tracking the progress of eight skiers climbing the side of the Dana Plateau above Ellery Lake. It seems late in the morning for the climb, but I find myself rooting for them, thinking “come on, just a little further to the top.”

A guy on a bicycle strapped with big, ballooning panniers pulls up next to me as the skiers turn around, carefully taking turns down the sun-cupped slope and picking their way across wet slide debris piles.

“You up here skiing?” he asks.

“Yeah, but in-bounds at Mammoth,” I say, turning my eyes from the blinding-white snow.

He’s ridden his bike all the way from San Diego, and said he had two more weeks to get as far north as he could. Judging by his progress so far, I imagine as far as he could being pretty far. He beats me on his bicycle down the hill, where I once again find myself at the Mobile Mart, ordering pizza from the deli. It’s my last real stop before the big push back to Truckee, and I soak in as much of the view as I can, trying to burn it into my memory.

One thought on “Flashback: Summer skiing at Mammoth” 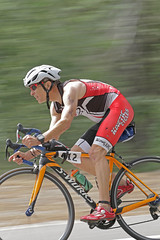 Thoughts and shots from adventures in the outdoors, by Greyson Howard

The relentless pursuit of the everyman's (and everywoman's) adventure. By Brendan Leonard